Is Laying Your Bike Down Proper Technique? 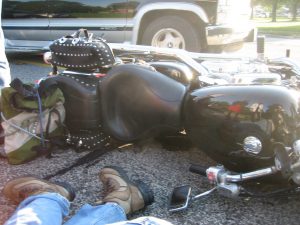 Today, I wanted to talk about a topic I saw go around about a week ago. I thought it was good for us to get it out there to discuss it further. I found it quite interesting and looked it up to make sure.

What is it about? It’s about whether laying your bike down to avoid a wreck is the proper technique to use. And the answer to that question is technically no. All of the safety programs and safety experts say you should not have to lay down your bike to avoid a wreck.

Should You Lay Down Your Bike To Avoid An Accident?

I know that’s this is a bit controversial, even for myself, because I’m saying, “Well, there could be situations where that might be beneficial.” I certainly have seen it in my practice where, in some cases, if it hadn’t been for someone laying his bike down, he would have been dead.

So, there are certainly exceptions to any rule, including this one. But the reason why I’m talking about this is the reasoning behind it. It reinforces some things that you need to think about and keep in mind as you ride.

What You Should Keep In Mind

Are you leaving enough distance in front where if someone’s not stopping, you can pull forward, or forward and to the right, or forward and to the left? So, that’s what I like the most about this safety tip, which is to reiterate and reinforce those things that you’re supposed to be doing all along, in hopes that you don’t have to resort to laying your bike down.

A Word About Braking

The last issue concerns braking. And I’m going to be doing a different video on that at a later time. But it’s a good reminder that you should be hitting those brakes in an emergency situation, so you’re not going to lose control of your bike. You’re not laying your bike down because you’re slamming on the front-back brakes.

What You Should Do

So, once again, it’s a good reminder to always be riding in a defensive posture. Have these things in your mind at all times, particularly the head-on swivel, where you’re watching what the other motorists are doing.

Have your outs and have proper lane positioning so you can see what’s coming at you. Also, make sure you can see where you can use your out to get out of the way without having to lay the bike down.

Meanwhile, I’d like to hear what you guys have to say. I know it’s a hot button issue, and again, there are probably examples out there where laying the bike down saved someone’s life. So there are always some exceptions. Please comment below. Shoot me an email. I’d love to hear what you think about this topic. And thanks for reading.