Proper Positioning Of Your Bike at an Intersection 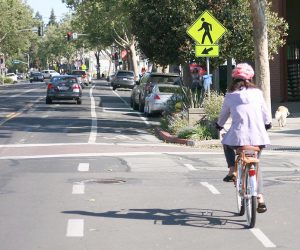 I’ve briefly talked before about positioning your bike properly as you’re driving. Now, I want to talk about how to position it as you’re approaching an intersection. What position should you aim for as you are thinking of that intersection and where you’re going to wind up?

All these things are going to play into what position you choose, but there are a couple of standard things that you need to be thinking about. The biggest one is the place where you don’t want to be. And that is the center or the middle third of the lane.

Why You Shouldn’t Be In the Middle

Why? Most importantly because there is debris in that area, including oil. That is going to cause issues with stopping as well as with accelerating through the intersection from a stop. So, if there are oil deposits or any other types of debris, you could lose control of your bike.

This could happen either as you’re stopping at the intersection or as you’re taking off. So definitely avoid being in the middle third. Instead, aim for the left or the right side.  Of course, the conditions are going to determine which option is better. Specifically, it depends on the type of intersection it is.

What Kind Of Intersection Is It?

I couldn’t tell you in every single instance which one would be the best option, but it’s going to be one of those two.

And here’s what you need to be thinking about as well: there are basically four things to consider when it comes to the position you should take. It even applies as you’re driving, but especially at an intersection.

First, you want to take the position from where you can see potential hazards, which means other vehicles in front of you. Number two is that you can be seen by other vehicles. Number three is basically about time to react. And number four is space to react.

When a car is heading towards you, you need to have time to see that hazard coming your way and then the space to go where you need to go. You need to be thinking of all those things as you’re approaching an intersection. Again, never be in the center of the lane, i.e., the middle third. And you want to prepare yourself in advance of reaching that intersection.

Given all these factors, where are you in the line-up of vehicles? What type of intersection are we dealing with? What do you have to the left and the right of you when it comes to being able to avoid hazards by going to the left or to the right? All of that is going to decide whether to pick the left third or the right third.

That’s some food for thought as we’re getting out there more and more as the weather is getting better. Always pay attention to proper positioning as you approach an intersection.

But we help each other by being able to share what we have experienced over the years when it comes to positioning at intersections.