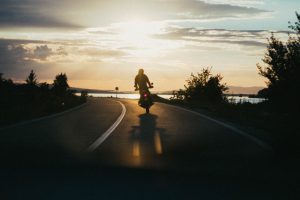 Today, my Savannah motorcycle accident law firm wants to talk about cornering and specifically traction. I know it’s a big issue among motorcycle riders and it came up for me recently with the loss of a Mr. Sharp.

He’s the individual that I posted about who lost control of his bike on the dragon. He was an experienced rider, and I don’t know exactly the particulars of what happened, but I can imagine traction and cornering had something to do with him potentially losing control of his bike.

Therefore, I wanted to provide some tips on cornering and traction. Some of this information will be getting rid of those myths and things that people often are concerned about. In fact, I think these myths sometimes get into your head and can cause you to lose confidence in cornering.

Traction is the amount of road that your tire in essence absorbs. Your tire’s rubber and if you notice on the road, if you run your hand over it, the road’s not smooth.

It’s got bumps and grooves, and that’s on purpose so that your rubber can lock in with the road. The question becomes how much traction do you get and what’s the correct amount when you’re cornering?

But, what about angles and those sorts of things that you should and shouldn’t take to give yourself enough traction?

In America, the standard for traction is 1 to 0.1 g of lateral force. If you get to that level, you should be okay. If you get above that, then you’re going to be losing a lot of traction, and you can lose control of your bike.

Depending on what type of bike you ride, also depends on exactly the angle, but in essence, 45 degrees of lateral force is the general answer. If you’re turning that bike 45 degrees, you’re putting about 1 g of lateral force on those tires, and you’re right at the limit.

On certain bikes, like Harleys, once you get to about 32 to 35 degrees, you’re hitting metal on the road, and part of that is on purpose. This is especially true if you have the highway bars which keep you from over a tilting your motorcycles.

Another myth is situations where people think you lose traction when you really don’t. Speed, believe it or not, speed does not have that much to do with traction. How fast you were going is not going to provide you with more or less traction, so speed alone is not going to be a big factor.

Is Rain A Factor?

Another one is rain. Now, here’s an interesting fact that I found, rain is one of those mental things more than anything else.

It’s not really as much about traction when it comes to the angling, but you get ordinary traction, even if you’re upright and not going into a corner. So, the first 10 to 15 minutes are the most dangerous when it comes to rain after that rain has very little to do with traction.

In the rain, you’re probably going to drop to about a .9 if you’re at your standard angle. If you’re going around a corner in the rain and it’s been raining for a while, you’re not losing as much traction as you mentally think you are.

Ways That You Can Mess Up Traction

Another thing I wanted to mention was different ways that you can mess up traction. I’m referring to user error that can mess with the amount of traction that you have.

This includes grabbing the brakes. When you’re in a turn, as most of you have seen and heard and have been taught, you don’t want to grab those breaks.

It’s instinct. Grab those front brakes and slam them on hard. That is not what you want to do. You’re going to lose a ton of traction. You want to slow down a little bit, break in advance before you enter your turn, and start the tilt.

Another one is chopping the throttle, which is a big issue. Then, you’ve got your standard issues. It’s maintaining your tires. If they’re too old, you have to replace them, and you have to keep proper tire pressure.

Believe it or not, weight is not a huge issue. If anything, the more weight, the better the traction that expands your tire and it’s going to give you a better grip on the road.

In short, be careful on these corners, study up again and remind yourself, no matter how long you been riding out there, it’s always good to refresh on some of these particulars. The next time you face rain or something else, you’re not going to lose control of your bike when you’re cornering.