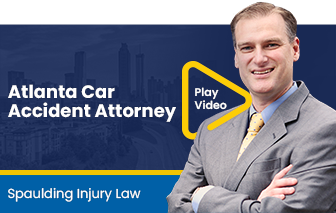 In the decade from 2003 through 2012, drunk drivers in Georgia were involved in accidents resulting in 3,699 fatalities. Whenever you drive in this state – or ride along as a passenger – it’s likely that there’s a drunk driver on the road with you. If you’re injured by an intoxicated driver in this state, discuss your injury, your rights, and your legal options at once with an experienced Atlanta DUI accident attorney at Spaulding Injury Law. In most cases, the injured victims of drunk drivers are entitled under Georgia law to complete compensation for their medical bills and other injury-related expenses.

When a motorist’s blood alcohol content (BAC) level is 0.08 percent or higher, that driver is legally intoxicated in the state of Georgia. When impaired drivers cause accidents, they face serious criminal charges, but they can also be held accountable for civil damages. If you are injured by a drunk driver, an experienced Atlanta DUI accident lawyer at Spaulding Injury Law can handle the case on your behalf. Your personal injury attorney will either reach an acceptable agreement through out-of-court negotiations or take your case to a jury.

Can You Win Compensation With a Drunk Driver Injury Lawyer?

If the case goes to trial, a good motor vehicle accident lawyer will fight aggressively on your behalf for the compensation and justice you deserve. If the driver responsible for your injuries – the person you name as a defendant in your personal injury claim – is convicted of DUI, that conviction is powerful evidence supporting your claim, and in almost all such cases, the victim’s claim will prevail and the victim will be awarded the compensation that he or she deserves.

If the driver who injured you is not tested, charged, or convicted of DUI, our Atlanta car accident attorneys at Spaulding Injury Law often rely on the nation’s top toxicology experts to establish and testify that an at-fault driver was impaired. Such evidence and testimony can make all of the difference, especially in those cases where a driver’s impairment was the result of a drug or chemical other than alcohol.

What About the Businesses That Sell and Serve Alcohol?

Businesses that sell and serve alcohol in Georgia can also sometimes be held accountable for negligence that leads to traffic injuries. Restaurants, bars, liquor stores, and other businesses that over-serve alcohol to patrons who then injure a third party can often be named as defendants or as co-defendants in these kinds of cases. Establishments that serve alcohol in this state are legally obligated to cut off customers who clearly appear to be drunk and impaired.

By conducting a thorough investigation and by building a convincing case built upon hard facts and witness testimony, an Atlanta DUI accident attorney can often help the injured victim of a drunk driver to recover financial damages for medical care, lost wages, and possibly much more. Get the legal help you need after being injured by a drunk driver in Georgia. Speak to a traffic collision attorney at Spaulding Injury Law by calling us at 770-744-0890. You may also contact the attorneys at Spaulding Injury Law by completing the contact form here on our website. We are ready and prepared to fight for the compensation – and for the justice – that the victims of drunk drivers need and deserve.